The Trump Victory And Two Sorts Of Racism

Sadly, I can’t remember where I read those words or who wrote them, but I have found them very useful for understanding American society for many years since. I now think you can’t understand the transition from Obama to Trump without them. 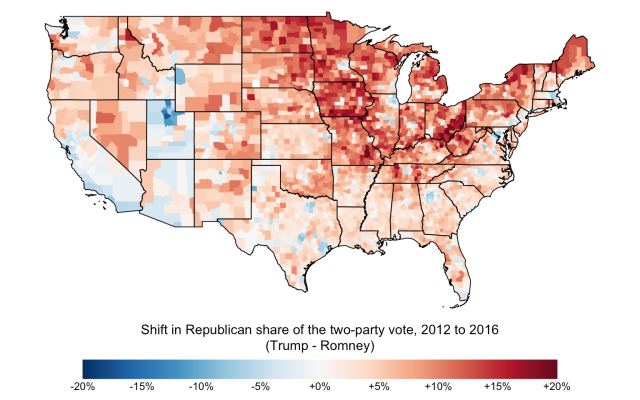 So to back up a bit. Since the election plenty of people have been having their say on what could cause America to elect such an obviously unsuitable, and deeply unpopular, candidate to the presidency. Most of the debate has been framed as bigotry versus economics. Crikey has presentedof both sides, with Bernard Keane pushing the former and Guy Rundle and Helen Razer the latter (ok Razer basically asserting the latter and denouncing anyone who disagrees with her, without providing, you know, evidence)

I’m always deeply suspicious of anyone who claims to be able to explain something as complex as an election before the results have finished being counted, particularly if they didn’t predict the outcome. So I’ve held off for a while. But I am now convinced that, like the blind men around the Republican elephant, both sides have got hold of part of the truth without representing the full picture. And I think the quote at the top helps bring things together.

The race/gender advocates not only have the problem that almost none of them picked the outcome, they also have to explain how it is that a country, and five states, that elected Barak Hussein Obama twice would be racist enough to elect Trump.

Now consider that quote. Of course it oversimplifies things – some people are racist both ways, some in neither. And no doubt the distinction between the two groups doesn’t neatly follow the Mason-Dixon line. Nevertheless, there is a fair amount of truth to it. Rich southern whites invited black maids and nannyies into their houses and poorer ones accepted them as neighbours as long as their low status was maintained. Northern whites were happy to have a black College Dean or mayor, but moved out the minute blacks started entering their neighbourhood.

Obama’s results fit this pattern very well. Obama actually did worse than Kerry or Gore through Appalachia, where traditionally Democrat voters couldn’t stomach a black man in the White House. But he did very well in the midwest, leading people to conclude that racism there was over.

Why then would people turn to Trump? It’s not just that his strongest supporters were also the most racist. Those who argue for economics as the reason blame the poor economic conditions and a desperate hope for return to the good jobs of the post-New Deal era. Yet Trump’s greatest success was not with those at the bottom of the economic pile, but those earning at least $50,000 a year, and often much more. Some have argued that his supporters were those who feared losing out – they had seen those around them lose their jobs and worried they were next.

But in fact, the areas that swung most strongly to Trump were not those that had been hit hardest. In many cases it was the opposite. Counties experiencing a mini-economic boom swung to Trump by often huge margins. As this article notes, the areas that really went for Trump were the ones where the creation of new, albeit low-paying, jobs saw the arrival of immigrants  through the Obama years. Latinos, not blacks, were getting too close. They hadn’t arrived in sufficient numbers to make a difference with their votes – and many of them aren’t citizens anyway – but they scared the pants off the inhabitants of what had previously been all-white counties. Trump’s biggest swings correlate very well indeed  with these newly heterogeneous counties. It won him the decisive states of Michigan, Wisconsin and Pennsylvania, and possibly Iowa and Ohio to boot.

If you don’t believe the claim that the arrival of ethnic minorities in previously homogenous communities can shake people, take a look at the study presented here.

But that doesn’t mean those arguing for bigotry have the whole elephant. Falling economic conditions for middle and working class Americans were decisive. But any shifts to voting for Trump from this source were small. Instead the effect is seen in who stayed home. We know much less about what influenced non-voters than what drove the votes of those who did go to the polls, but what we do know  suggests that millions of normally solid Democrats didn’t vote, in large part out of frustration at the failure of their party to address their economic concerns.

The combination of whites sufficiently appalled by the brown faces turning up at the local supermarket, and people of all shades feeling Clinton didn’t offer enough to make it worth standing in line for hours, was a double punch that put a buffoon into office.

These, of course, are only the two biggest factors. The blatant lack of democracy of the electoral college was obviously decisive as well. Voter suppression laws, fake news sites, email hacking and FBI interference may each have been big enough to swing things on their own, and certainly were collectively.

But for those trying to learn lessons for next time, or apply them to the rest of the world, I think the place to start is with white identity politics as the driver for right-wing votes, and the failure to address economic insecurity as the reason turnout was low enough that this could win.

I am a science journalist, specialising in Australian and New Zealand research across all fields of science. My book, Forensics, Fossils and Fruitbats: A Field Guide to Australian Scientists is out now through CSIRO Publishing. I am also a professional returning officer for non-government organisations. I'm very politically active, but generally try to restrict this blog to scientific matters.
View all posts by Stephen Luntz →
This entry was posted in Uncategorized. Bookmark the permalink.

2 Responses to The Trump Victory And Two Sorts Of Racism