When I expressed an intention to write obituaries marking the passing of great figures in Australian science I hoped not to be writing too many. In particular, I really didn’t want to be writing one for someone who had such a huge influence on my life. But I certainly couldn’t let his passing go unmarked, even if it is good to see quite a bit of attention being paid elsewhere. 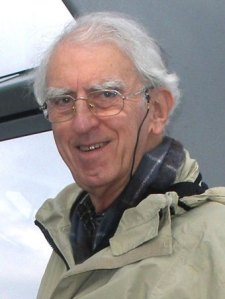 I only met Peter Pockley once, and while I spoke to him on the phone many times it was just to answer a call and pass him over to Guy, my editor. However, like every other science journalist in Australia I owe him a great debt. In my case the debt was bigger than most. It’s far from certain that Australasian Science, the magazine which has been central to my life for 15 years would have existed without him.

The magazine I write for was formed from the amalgamation of a previous version under the same name and Search, which had once been the house journal of the Australian and New Zealand Association for the Advancement of Science. Peter had written a column for Search in its later years, and in the early days of Australasian Science he was the other employee, although he emailed in his work from Sydney, rather than sharing an office with myself and Guy.

Peter wrote mostly about the history of Australian science, including profiles of many of the most prominent figures, and about science policy. Over the years, as his health failed, he wrote for us less and less and this has left a major hole not just in the magazine but in Australian public discussion. I am not aware of anywhere today that one could read thoughtful articles of the sort Peter wrote about the implications for research of ministerial reshuffles or bureaucratic restructures.

Coverage of Peter’s death has focused on his role establishing the ABC science division and reporting the Moon Landing. However, in my time his most significant achievement was in exposing the debacle going on at CSIRO in the early years of this century. From 2001 to 2008 CSIRO’s Chief Executive was Geoff Garrett. His term was marked by major restructures and an increase in senior managerial positions at the expense of funding to frontline research. There was also a tendency to talk in corporate speak that could have come straight out of an episode of The Office, which did little for morale.

Peter was like a terrier on the case, constantly trying to cut through the bluster to get at the real implications of all this for the institution that sits at the heart of Australian research, and arguably has done more than any other, parliament excepted, for our quality of life.

Things were at their worst when Donna Stauntan was in charge of communications at CSIRO. Staunton had been the lead advocate for the Tobacco lobby in Australia, first at Phillip Morris and then at the Tobacco Institute. In this capacity she had claimed, both on national TV and under oath before the Senate that nicotine was not addictive and passive smoking was harmless. As a board member of the IPA she was directly involved in promoting climate change denial and organising campaigns to bully and defame climate scientists and, to a lesser extent, scientists working in other areas inconvenient for the Australian right. Meanwhile she was in charge of communicating the work of those same scientists.

Not surprisingly the quality of information about research in these areas dropped, and many employees – both scientists and communications staff leaked information about the farce that was occurring. It was to Peter much of this information leaked and he ran the case, primarily through Australasian Science, until her position became untenable and Staunton left. I had nothing directly to do with this, but I was proud that some people were reading the magazine for the snippets I provided on new research, and encountered Peter’s work in the process.

In many ways Peter and I had the exact opposite approaches to science writing. I write fast. After the second edition Peter sent me a message congratulating me on the quality of my writing, but more particularly on the speed with which I was able to produce so many articles. He expressed disbelief that I could contribute 3-4 articles a day (now 4-5). Peter often frustrated his editors with the slow pace of his work and his lax approach to deadlines. He also often wrote pieces that were far too long and needed drastic editing. On the other hand, he was an investigative journalist in a way I can barely contemplate, digging out the hidden story powerful forces want to stay hidden. What I hope we have in common is a capacity to put scientific research into context, to write not just about the learned facts and theories but how these connect to other areas of science and to bring to life the people behind the work.

By the time he was writing for us he was also teaching and mentoring a generation of science communicators at the University of Sydney, as well as teaching scientists how to tell the public about their work, an incredibly important role while science communication remains greatly undervalued in Australia by contrast with many other developed countries, particularly the UK.

Australasian Science has survived very well since Peter largely became too sick to write for us, but I wonder whether we would have got off the ground without his influence in the early years and at Search. I also wonder how much longer CSIRO’s communications division would have remained in thrall to a destructive tyrant. But most of all I wonder how much less advanced science communication would have been without Peter’s legacy. For all those things I am intensely grateful.

For anyone wishing to support his legacy, getting behind this campaign looks a good way to do it.

I am a science journalist, specialising in Australian and New Zealand research across all fields of science. My book, Forensics, Fossils and Fruitbats: A Field Guide to Australian Scientists is out now through CSIRO Publishing. I am also a professional returning officer for non-government organisations. I'm very politically active, but generally try to restrict this blog to scientific matters.
View all posts by Stephen Luntz →
This entry was posted in Australasian Science, obituary. Bookmark the permalink.