In looking though my writing I have come to the conclusion that obituaries bring outthe best in me – certainly quite a few of my best pieces relate to someone’s death. While I hope to be have very few opportunities to develop this skill, I have also decided to try to mark the passing of major figures in Australian science as best I can.

In this vein, I regret to inform readers that Michael Morwood has died. The first person I reported this to didn’t hear the wood for the es and asked “which one?” thinking of the numerous prominent Michael Moores. I’m sure that for the vast majority of the population, the complete name brings no enlightenment. Morwood was hardly a household name.

On the other hand, almost everyone knows of this most famous discovery. Homo floresiensis, better known as the Hobbit, struck a profound chord with the popular imagination. I remember a room of people profoundly depressed by the outcome of the 2004 election (particularly Steve Fielding’s victory over David Risstrom) finding the Hobbit’s announcement to be the only positive thing they could think about to take their minds off the disaster.

Undoubtedly the popular interest in H floresiensis would not have been nearly as large without the name, particularly coinciding with the release of the Lord of the Rings films. Nevertheless, the idea that a species such as this flourished as recently as 12,000 years ago is a truly momentous development in palaeontology.

For a start, it would be by far the most recently extinct member of the human genus, besides our own. Neanderthals are generally thought to have died out 30,000 years ago, and some evidence suggests it was even earlier. Homo erectus, who the hobbits seem to most closely resemble, disappeared about 140,000 years ago. While various cranks may have argued for the continued existence of Yowies and Bigfeet, no serious scientist expected to find such a recent example of a close relative who was not actually one of us.

The existence of H floresiensis remains somewhat controversial amongst anthropologists. Prof Maciej Hennebeg of the University of Adelaide continues to claim that the bones found at Liang Bua come from humans, some of whom had genetic conditions leading to reduced growth. Further research has been hampered by the hostility of leading Indonesian anthropologist Teuku Jacob to the idea of the hobbits as a separate species. It is alleged that Jacob has used his influence within the Indonesian scientific community to stymie  digging at other promising locations, and even if these claims are exaggerated, it certainly seems Jacob has made life difficult for those who support the H floresiensis hypothesis. 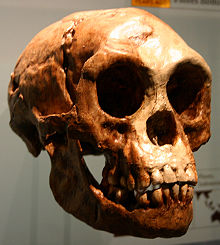 Cast of the skull found at Liang Bua that Morwood revealed as a new species.

Nevertheless, it does seem that the balance of evidence, and expert support, now weighs heavily in Morwood’s favour. If further examples of hobbits emerge from Flores or nearby islands Morwood will go down in history as one of the most important scientists in his field, almost certainly the most important Australian.

In describing him as such I should acknowledge that, like so many we call our own, Morwood was actually a New Zealander by birth, a status to which he will no doubt be resumed if it turns out he was wrong.

I never interviewed Morwood for the Cool Scientist column, something I now deeply regret. Consequently, I can provide no insight on his personality or inspirations beyond what is available online. Australasian Science ran several features on the topic (one this year), but these were all written by scientists involved in the research. I did however cover several of the more minor developments, interviewing members of Morwood’s team. I’m not sure if this included the man himself.

Those who knew him describe him as inspirational and generous. Scientific debates in the field of human evolution get more bitter and personal than any other field of science, but Henneberg refers to his death at 64 as a “tragedy – a premature end of life of an energetic, inventive and hard-working archaeologist”.

It is interesting that, while Morwood’s doctorate came from ANU, he spent most of his career at universities well outside the G8, first at the New England and then at Wollongong. I don’t know whether this reflects a sort of scientific exile until the Hobbit’s discovery, or if these universities have a strong focus on palaeontology – neither of them seem keen to promote themselves to Australasian Science, so I hear little of what they do.

Nevertheless, it is clear that Morwood was not a second rate scientist who happened by sheer chance on the discovery of the century. Prior to finding bones at Liang Bua he developed techniques for improving the location and analysis of fossils and he was considered a master at directing large collaborations. Without such skills there is a high chance the significance of the Flores fossils would never have been noticed. The collationg of evidence from many fields of expertise to rule out alternative interpretations owes much to Morwood’s skills in this regard.

These same strengths contributed to his other major discovery – the presence of stone tools a million years old in Java and Flores. Colleagues have paid tribute to his work on the extraordinary rock art of the Kimberley, art of truly astounding global significance that is threatened by the development-at-any-cost attitude of the Western Australian government and the weak response of the federal government.

The debate over the Hobbit demonstrates the imperfections of science. Initially some paleoanthropologists took sides, not so much on the merits of the argument but out of feelings of resentment at not having been part of the discovery, or friendships with those on one side or other of the debate. Nevertheless, the self-correcting nature of science means that, in the long run, the truth will almost certainly win out. The same cannot be said for the media. Shortly after the Hobbit’s announcement Australia’s media empires took sides. Fairfax pretty much only ran stories from supporters, whereas The Australian heavily favoured those who disputed the discovery of a new species.I doubt either side will ever admit they were wrong.

Given the popular enthusiasm for the find it is not clear what prehistoric axe Murdoch’s minions had to grind. I have no idea if Morwood, or one of his colleagues, offended them through climate change advocacy, or some similar thought crime. Perhaps they were just put out that the best interviews had gone to rivals. The most horrifying possibility of all, that they were in league with the creationists (who of course were deeply wrong-footed by the announcement) is hard to believe, until you read pretty much anything written by Graham Lloyd.

However, one possibility occurs to me in this. The discovery of such a near relative caused many people to ponder the nature of being human. What would the ethical issues be if the Hobbit had survived, if today we lived side by side with another race? One that was not fully human, but also something that could not be conveniently defined as “other” as gorillas and bonobos can. I think this was something that Morwood and his team enthusiastically encouraged and the choice of nickname was part of this.

Such thoughts can make us question the way we treat our world, and each other. They remind us that if extinct members of our genus are family, then all members of homo sapiens are close family, and perhaps should be treated as such. It is perhaps not surprising then that such a discovery, seemingly without political implications, might be bitterly rejected in some quarters.

I am a science journalist, specialising in Australian and New Zealand research across all fields of science. My book, Forensics, Fossils and Fruitbats: A Field Guide to Australian Scientists is out now through CSIRO Publishing. I am also a professional returning officer for non-government organisations. I'm very politically active, but generally try to restrict this blog to scientific matters.
View all posts by Stephen Luntz →
This entry was posted in Anthroplogy, obituary, Paleontology. Bookmark the permalink.