The Devil Is In The (Epigenetic) Detail

Were it not so tragic, the Tasmanian Devil Facial Tumour (TDFT) would be one of the best scientific stories around. Any good scientific research project is like a detective story, with various false leads and twists of fate, and this has had some doozies. So I don’t want to be too confident that we actually have the killer identified, but it certainly seems possible. Sadly, stopping the slaughter may prove at least as hard. 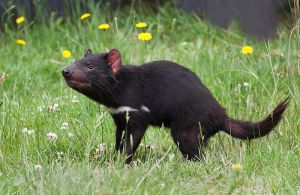 Healthy Tasmanian Devil. The shots with tumours are too gruesome to post.

Background for anyone unfamiliar with the case: Tasmanian devils are the largest surviving marsupial predator. They earned their name for many things, but one of them is the aggressive way they behave towards each other, which involves a whole lot of biting. And this biting may be their doom. At some point maybe 30 years ago some devil developed a cancer. Sad for the devil, but usually not of significance to the whole species, except that this cancer turns out to be transmissible. If one devil bites another with a facial tumour it can pick up the disease. An infected biter can sometimes have cancer cells on its tooth which can infect the bit.

Transmissible cancers are not unknown in other species, but they are rare. There are two reasons for this. One is that there usually isn’t a good mechanism for transmission. There is some concern infected devils could bite quolls, their nearest living relatives, and the quolls could get the tumour. However, since quolls don’t bite each other nearly as often as devils do, quoll to quoll transmission is likely to be a lot slower than amongst the devil population. Unless the average quoll manages to infect more than one fellow before it dies the disease will do minimal damage.

The other reason is the body is usually pretty good at rejecting foreign tissue. This is why organ donations are so hard. We have to either get hearts or kidneys from someone who is a match for us, or take immune-suppressant drugs so our bodies can cope with what they see as an invader. The same would normally go for someone else’s cancer. Immune systems normally recognize it and fight it off.

So the devil’s cancer posed a bit of a mystery. We knew how it was being transmitted, but why was it not being rejected. Devils have very low genetic diversity, and for a long time it was thought this might be the problem. Just as identical twins can share organs more easily than ordinary siblings, who in turn can donate with fewer problems than lovers or friends, a transmissible cancer would have more chance getting under the immune system radar of a closely related individual. If all devils are closely related, thanks to a genetic bottleneck some time back, they would be particularly vulnerable.

The devil population seems to be divided between those in eastern and western Tasmania. It was thought the western population was more diverse and therefore might be more resistant to the disease, but recent evidence has put that under some doubt.

Two years ago a University of Sydney/University of Tasmania combined team demonstrated that devils will reject skin grafts from other devils, but not from their own skin. In other words their genetic diversity is low, but high enough to reject tissue from other individuals. So the question became, what was different about the TDFT that allowed it to not be detected.

Now they think they have their answer. The secret to the body’s rejection of tissue from relatives is the Major Histocompatibility Complex or MHC. Each of us produces proteins on the surface of our cells based on our MHC. The immune system uses these to recognise whether a cell is from its own body or outside. The more similar to my MHC yours is, the greater the chance we could share organs without the our bodies rejecting them.

This is not just a human thing – I don’t know if all animals do it, but certainly all mammals do. However, the tumour has found some way to turn off the genes that produce these MHC proteins. I’m not sure if this is literally the case, but from the way The University of Sydney’s Greg Woods described it you would think the surface of the cancer cells are smooth where the MHC proteins should be. Consequently any devil, no matter what its MHC won’t recognise the cancer as foreign.

Neat and horrifying at the same time. The potential for a sexually transmissible cancer is enough to keep you awake at night. Alone.

The good news is that the UTas/USyd combo have shown that the MHC genes are not absent in the cancer. They exist, but have been turned off by methylation, an epigenetic effect, and this can be reversed. They’ve demonstrated that it is possible to turn the genes back on and have the MHC proteins reappear, at which point the immune system will fight the cancer.

Cool huh? The devils be saved! Sadly no. The cytokines that turn the MHC genes on break down fast inside the devil. Woods says, “One possible solution is to modify the cytokine molecules so they are more stable.” .Alternative ideas include taking tumour cells from infected devils, modifying them so they express the molecules and re-injecting them. “This could jumpstart the immune system so it then recognises other tumour cells,” suggests Woods. It’s going to be tough enough protecting devils in captivity. Getting some sort of protection to devils in the Valley of the Styx is going to be a hell of a task.

Sorry to leave you at a cliffhanging point in the plot, but that’s all we know for now.

There is, however, something else to be drawn from this tale. One of the scientists involved with this research noted that the TDFT could turn out to be a huge boon for research into human cancers. I can’t find the exact quote at the moment, but he said something about how we get to watch the cancer’s behaviour as it moves from one individual to another, in the process teaching us things about cancers that would be nearly impossible to learn when looking at them in a single person.

This, I think, puts the question of the ethics of animal experimentation into a new light. For quite a few people, experiments on animals are a cut and dried issue: We have no right to do anything to them that might harm them in order to benefit ourselves. While this might get a bit hazy if we’re talking about studies in the wild this usually means no locking up animals so we can study them. If we would not conduct experiments on humans without informed consent we should not do so to animals, runs the argument, since they cannot give informed consent (and probably wouldn’t if they could).

What then to make of the quest to fight the disease. There is no evidence that humans caused TDFT, although anthropogenic stress probably contributed to its spread. However, if we do not intervene to stop its spread are we not culpable, just as we would be if we chose to not save a drowning child? Yet to understand the tumour we have to conduct experiments that are not nice, and indeed have sometimes proven fatal, to individual devils? Can we truly justify sacrificing an individual to save the species?

While some would indeed choose to walk away from Omelas, even most hardened vegans would, I think, consider the loss of the devil too great a price to pay. But if we can sacrifice devils to save other devils, what about closely related species? If we thought a few quolls could help us get to the bottom of the problem is that ok? And if we can kill or hurt some of one animal species in the quest to save another, why is it not ok to do the same on our own behalf – to save millions of people from our own cancers?

I’m asking these questions not to mock animal liberationists. I think we have been far too lax in the past in what we were willing to do to animals in research labs to benefit ourselves. Indeed I’ve written about a few research programs that have made me pretty queasy myself. I lean towards the utilitarian as a rule, but I am uncomfortable with the philosophy in its purest form and at the very least I think that animal rights activists have played an important role in pushing us to include, even at a hugely discounted rate, the good or harm to animals in attempts to assess the worth of projects.

However, I think the tendency to black and white thinking is a plague on society, and opponents of animal research seem more given to it than most. If we accept, for a moment, that it is legitimate to study cancerous Tasmanian Devils for the sake of their own kind and if, in the process, we learn something that could protect millions of humans from an early death, do they really want us to flush that knowledge down the sink?

I am a science journalist, specialising in Australian and New Zealand research across all fields of science. My book, Forensics, Fossils and Fruitbats: A Field Guide to Australian Scientists is out now through CSIRO Publishing. I am also a professional returning officer for non-government organisations. I'm very politically active, but generally try to restrict this blog to scientific matters.
View all posts by Stephen Luntz →
This entry was posted in medical science, Philosophy. Bookmark the permalink.

1 Response to The Devil Is In The (Epigenetic) Detail