Paving A Freeway To Hell

The front page of today’s Age carries a story about Professor Mike Archer’s Lazarus project, an attempt to bring back from the dead the extinct gastric brooding frog. Archer is using cloning techniques to inject the frog’s DNA into eggs from a related species in an effort to recreate the species.

The loss of any species (at least any animal species, I shed no tears for the smallpox virus) is a loss to the planet. Extinction is part of the natural order of things. At least 99% of the species that have ever lived have gone extinct. But so is death. When a plague or a murderer cuts an individual down in their prime our lives are all poorer for it. Still more-so when it is a unique species of creature that has been lost. So there is understandable excitement at the idea of bringing back something we have lost, particularly when its extinction was one of millions where the fault lies with us.

Moreover, the gastric brooding frog is not just any species. The entire genus is gone, and with it the extraordinary process of bringing up its young inside that most hostile of environments – the stomach.

Archer is indeed a great scientist, and if he can bring back this frog it will be a stunning achievement, one that will no doubt be celebrated far and wide. Amongst other things, it will be yet another poke in the eye for the forms of religion that stand in opposition to science. You say you can raise the dead – but we have the proof. I also have no doubt Archer is in this for all the right reasons. As he puts it, “If we were responsible for the extinction of the species, deliberately or inadvertently, we have a moral responsibility or imperative to undo that if we can.”

Sadly, what Archer is not is a politician, although he did mentor one – he was Senator Kerry Nettle’s supervisor when she achieved that rarest of qualifications for an Australian member of parliament, an honours degree in science. What scares, nay terrifies me, about the Lazarus project is what it will do to the ecological debate in Australia. Twenty years ago the Tasman Institute was touting the idea that we didn’t need to worry too much about the loss of endangered species – we could just store their DNA for the day we could bring them back. Much cheaper than protecting their habitat. It never got much bite though. The idea was just too science fiction.

But if someone at the IPA has not already started drafting the follow-up after reading the Age piece it’s only a matter of time. Once we actually have a living species hopping across our TV screens every logger, miner and Green Wedge developer will be onto it. If we can bring back the gastric brooding frog, they’ll reason, why should we preserve the patch of bush that represents the last known habitat of the green and gold bellfrog, or the growling grass frog or… Few will argue for consciously driving species to extinction, but the burden of proof will shift, at least in the eyes of those who were never happy about the limited restrictions we currently have. The need for extra care will be gone, they will argue. We can take the risk because should their particular project sound the deathknell for a species there’s always their DNA tucked away in some freezer somewhere.

This, of course, is a diabolical way of looking at the world. For one thing, when we save habitat on behalf of a single charismatic vertebrate species we’re usually saving uncounted invertebrates, plants and bacteria, many of which have never even been described by science. Their DNA is unlikely to be on file, and the cost of bringing them all back would be prohibitive if it were. But that’s not an argument worth a candle compared to the threatened extinction of a pygmy possum so cute even adults hanker after a plushy imitation to hug. Moreover, the capacity to reintroduce a species into the wild – to bring it back to real life – will be limited if the ecological network in which is thrived has been torn to shreds. This might prove a more powerful rhetorical tool, but I fear that the moment Archer announces success the most endangered species on Earth will not be a plant or animal, but endangered species legislation in jurisdictions with right-wing governments. 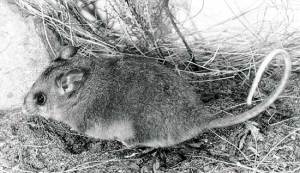 Granted there is a more optimistic way to look at this. Perhaps the recognition of the cost of bringing back the gastric brooding frog will serve a wake up call to just what we are losing. Maybe the cry “you don’t know what you’ve got ’til its gone” will be supplanted by the recognition “you don’t know what you’ve lost until you get it back”, but I fear this is less likely. A lot less likely.

Archer’s original plan was to bring back the Thylacine, or Tasmanian Tiger. This seems to have proven too hard. The current dire state of the Tassie devil – the tiger’s closest relative and most obvious surrogate – may have been a factor. Much as I’d love to see a breeding pair of tigers turn up in some remote valley, I think this is a good thing. The political impact of reviving a frog will be small if there is no sign we can do the same to mammals.

Other arguments have been raised against the idea of bring species back from extinction (see the bottom of the National Geographic post for a good summary). I think some of these have merit as well. However, the problems these raise pale into insignificance before the threat to efforts to protect habitat, not just in Australia but worldwide.

I’d love to be proven wrong, I suspect that until society truly comes to grips with what we are doing to the planet it’s best to hope that Archer is premature in his confidence. That the gastric brooding frog needs, for the sake of countless other species and the warp and weft of the ecological cloth on which we all depend, to stay dead.

I am a science journalist, specialising in Australian and New Zealand research across all fields of science. My book, Forensics, Fossils and Fruitbats: A Field Guide to Australian Scientists is out now through CSIRO Publishing. I am also a professional returning officer for non-government organisations. I'm very politically active, but generally try to restrict this blog to scientific matters.
View all posts by Stephen Luntz →
This entry was posted in Uncategorized. Bookmark the permalink.

2 Responses to Paving A Freeway To Hell